Accessing your favourite bingo or casino site has never been easier, especially with the continued advancement of online technology. Even though we know that the reality of gambling online means the odds will always be with the site, it doesn’t mean we don’t enjoy the time we spend playing.

Have you ever considered whether your bingo game is rigged? Most players will trust the site they choose, and many won’t have thought about it. But it’s always good to know if your online bingo site is fixed or fair, because you are using money you have worked hard for, and it is important that the basic rules are being adhered to.

The majority of players who question the legitimacy of the bingo site, do so because it is made up of a coded algorithm. If you were in a land-based casino you could actually see the bingo caller drawing the ball, whereas online you have to accept what numbers the programme gives you.

Let’s dig a little deeper and see if online games can be fixed by the designers or sites and if it’s worth spending your money playing online bingo.

Is Your Online Bingo Site Fair?

Before you spend any money on a casino or bingo site, ensure that you follow these steps to confirm that you are with a reputable brand which offers fair play. 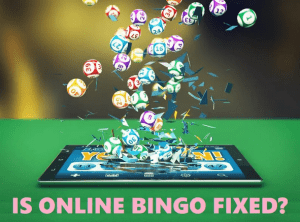 The most important step for any gambler, is to ensure that the site they are playing on is regulated. Most decent sites will be licenced by regulatory bodies, which for the UK is the UK Gambling Commission (UKGC). So why is this important? For a site to hold a licence they must follow strict guidelines including checks on your games by external auditors.

To establish if your betting site is UKGC regulated, you simply need to head to the bottom of the site. Most will have the gambling commissions logo there and you can click on it to be taken through to the licensee information. If they don’t then it doesn’t automatically mean they are unlicenced. Instead, you should head to the UKGC site, because they have a search option where you enter the name of the betting site into the ‘Check a gambling business licence’ section. This will confirm whether the site has an active licence or not.

Even though there can be an element of bias with some players, checking the online reviews for your gambling site can have its benefits. The fact that you can discover the problem areas of a site from other players experiences is invaluable; it may even be aspects you hadn’t considered. If the betting site has lots of positive reviews, then you can be confident that you will have a better experience and that the site or game will be reliable and fair towards players.

Personally, we will always search for any new gambling site on Google before we register with them. If you come across complaints about your chosen site, then you need to determine if the reviewer’s problem was something that would bother you too. People are known to complain for the sake of it, and their issues may not be something that would concern you, for example a payment method you would never use.

Most areas that people complain about will be connected to terms and conditions, because these are the things that catch many out. Many players haven’t read them and then get caught out by wagering requirements which means they are unable to withdraw their winnings. We have read complaints where gamblers have been banned for playing excessive free bingo games. But you will find that many players link back to a belief that the game is rigged, with comments more commonly being that the same people always seem to win.

If you began by checking that the site is UK Gambling Commission regulated, then you should be ok. But it’s not a bad thing to make sure that the site is stringent with their checks, especially when it involves the Random Number Generators (RNG).

Although we have written a full guide on the use of Random Number Generators, here’s a basic explanation of how they influence your gaming. RNG is a code which is added to the game by designers to make sure that it is fair and consistent. The casino you choose will not have access to the RNG, which means they cannot interfere with the coding to benefit them.

As part of their UKGC licence the site is required to conduct an audit with independent testing bodies such as eCOGRA and part of this must include the RNG. The results of the audit must be made available for players and as such you will find a logo with a link at the bottom of the screen. If you click on it, then you will be taken through to the full details.

Many people get frustrated by identity checks, but they’re actually a UKGC requirement to maintain their licence. As well as this they are important to make sure that gamblers are who they say they are. They also reduce the impact of fraudulent activity and protect other players including you. This is important because it means you can be confident that the other players on the site are legitimate.

The actual process for checking players identification is easy for most, and it protects everyone from issues including underage gambling, identity theft and money laundering.

Bingo Balls – How are They Chosen?

For players visiting a land-based bingo hall, their game will involve a caller who will draw a physical ball and call out the number. The fact that the ball is drawn in front of your eyes, means you know that the outcome is purely chance.

So, if online bingo doesn’t have a caller, then who picks the numbers and how are they chosen?

This all links back to those Random Number Generators (RNG), because they are basically your bingo caller. We have mentioned that the RNG is designed by the games creators with an emphasis on ensuring there is fairness and consistency. It is this coding which will provide that element of randomness that you would normally find in a physical game of bingo.

The RNG’s used within the gambling industry tend to be pseudorandom number generators and they require a seed number. This seed changes the outcome every millisecond by altering the last number or last two numbers produced. It then uses a mathematic formula which will create that random outcome and produce the virtual bingo ball.

Throughout the many blogs and forums, one of the top complaints by players is that they never win, or that the same people always seem to win. Losing streaks are tough and they can feel like they go on forever, but that doesn’t mean that the game is fixed.

Think of it from the perspective of the gambling site, would it make sense for them to only allow a certain player to win or have no one win. The reality is they’d soon be found out and as well as losing their reputation within the industry, they’d also have their UK Gambling Commission licence removed.

We have to accept that because we play regularly, it doesn’t mean we should expect constant wins. This is known as the gamblers fallacy and is something many people believe; but remember the RNG is there to ensure the game is completely random. You wouldn’t expect to win the lottery regularly because we know that it’s pure chance. That’s how you should view your gambling time, because playing a lot doesn’t mean you’re building up to a win. It’s this unpredictability which adds excitement to gambling online in the first place, which is why the RNG is so important.

Gambling online should be viewed as more than winning, yes that’s exciting, but it can be the reason why many players end up with serious addictions. Should you feel that you are struggling with controlling your gambling then please reach out to addiction help lines such as begambleaware.org. Playing online should be a form of entertainment and a way to make social connections, not to help pay the bills.

If you find that certain players always win, then there may be other factors which you haven’t considered. Are they playing with more credit than you are and have they purchased the maximum number of cards or played for longer. On many games you can purchase a maximum of 96 cards, which when you compare it to your 1 card, means the other player had 96 times the chance of winning over you.

In reality, purchasing a lot of cards isn’t a good strategy to follow, as it can lead to you spending a lot of money before you win anything. Instead, you could pick games with a lower maximum ticket number.

Are Winning Strategies Worth it?

Some players think that strategy is the best way to help you win, but again the RNG will impact that. There isn’t a definitive strategy for winning, or everybody would be doing it.

If you find a site where you can pick your own bingo cards, then the better option is having an even amount of both odd and even numbers. Statistically this will give you a greater chance at winning. Unfortunately, many sites won’t let you select your own cards, instead you’ll be given one randomly. As to whether this works or even provides a bigger increase in winnings is unlikely.

Most players win because they have spent a large amount of time and money on the site, which is known as the ‘heavy depositor effect’. But the reality is that they will often end up spending more money than they will win.

We always advise people to just play for fun, because that is the reason you should gamble online. If your goal is planning a strategy and working out how to win, then you’re not focusing on the main reason you’re playing. The only strategy we recommend is making sure the site is licenced by the UK Gambling Commission and checking out forum reviews.

Summary of Online Bingo – Is it Fixed?

This will depend on the site you have chosen, but generally we don’t believe online bingo is fixed. The best thing to focus on is the reputation of the site, from reviews and blogs, and making sure that they are UK Gambling Commission regulated. The fact that they take legal requirements seriously and knowing that they will respond to your queries and offer support, will put your mind at ease. The crux of it is, we will never truly know if the site is rigged, but we have to trust the external authorities such as the UKGC and auditors alike eCogra. They are so strict with the gambling sites it gives you some comfort that they have players safety at heart.

There are a few brands who are renowned for their bingo games, they are:

Because these brands are so well known there is a reduced chance that their bingo games will be fixed. Reputation is important to them and any rumours that their games may be rigged, can have a devastating impact. That makes betting sites from larger brands a good starting point if you’re looking for fair gaming.

As well as this guide we have others including What is Slingo, Casino House Edge UK Explained and What is Multi Stake Bingo.