Many players gamble because they are looking for fun and a chance to walk away with more money than they started with. But also, there is the hope that someday they will win a life changing amount of money and can retire to a beautiful island drinking pina coladas all day every day. The last thing they want to think about is tax, but if you do win then it’ll be one of the first things on your mind. As always, we are here to lend a helping hand, so here are gambling winnings tax in the UK explained.

The History of UK Gambling Tax

Gambling has been around for centuries, but it wasn’t until 1961 that a betting duty of 6.75% was placed on operators and a 9% tax was passed onto the players. At that time the bettor had the choice whether they wanted to pay tax on the stake or their winnings. As you can imagine most chose to pay it on the stake, not knowing if they were going to win.

This all changed in 2001 when the bettor taxation was ended by Gordon Brown who was the Chancellor of the Exchequer. The levy was removed from the player and a 15% supply tax was imposed on the bookmakers. Such a dramatic change was introduced to prevent UK players from opting for offshore companies, especially because this was a time when there was a surge in the popularity of online gambling in the UK.

Although this was a great change for players, it didn’t resolve the issue of tax avoidance for the government. The betting companies were taxed at the point of supply, so many moved offshore meaning they were supplying the services to the players and paying no tax to the UK government. This is why you will see many of the larger brands are based in Gibraltar or the Isle of Man.

Because of the loss of tax revenue, the UK Government in 2014 amended the Gambling Act 2005. They replaced the point of supply tax with a point of consumption or remote gaming tax, which means that if you have any UK players betting, then you would be liable for the 21% tax. This had a significant impact on the industry, with many closing their doors to UK bettors.

Do Casual UK Gamblers Pay Tax on Their Winnings? 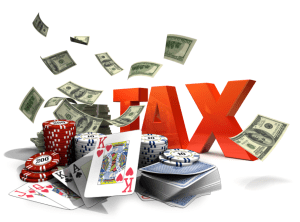 We’ve delved into the history of tax, so you’ll probably have surmised the answer already. But could you imagine playing online or at a land-based casino, hitting that jackpot and then having to workout what you owe HMRC? It wouldn’t exactly fill many people with joy. We all know that there’s a chance we can lose money when we bet, but having to give away a percentage of your winnings feels like a kick in the teeth.

Many other countries such as the United States of America and France have a tax on winnings. Thankfully within the United Kingdom there is no taxation on any winnings from gambling. So not only can you wager and know what you win is completely yours, but you also don’t have to go through the rigmarole of contacting HMRC to declare your winnings.

So that we clarify the full details, this is for all players who are in England, Wales, Scotland, and Northern Island and applies to online and land-based betting establishments.

Are There Any Additional Taxes I Should Be Aware of?

Depending on how much you win, you may not want your winnings to simply sit in the bank. Therefore, it may be affected by one of these two additional taxes.

Gift Tax – You can legally gift up to a set amount of money to family and friends without it being taxed. It is currently £3,000, but obviously this may change in the future. If you give more than the maximum amount, then there will be a taxation implication.
Inheritance Tax – Should you leave any winnings as part of your estate, then this may also be taxed.

It makes sense not to tax a casual player who only has the odd win, but what about the professional gamblers who make thousands. The UK’s law on taxation means that no gambling related winnings are taxed by HMRC and as such this includes players who gamble for their jobs. This should be a relief, because if you win big you don’t have to give any of it away. For any professionals playing outside the UK, you may have to deal with the taxes from that country i.e., if you take place in a tournament in Las Vegas.

How Are UK Gambling Companies Taxed?

We’ve mentioned company tax within the history section, but it’s worth going into it a little further because there is a knock-on effect to the player. Our winnings may not be taxed but the gambling companies are, with a 21% point of consumption tax being taken by HMRC. The site will also have the usual corporation tax applied, which is a legal requirement of any UK based Limited Company. Land based casinos in the UK will have varying taxation rates, depending on the games that are played.

So why mention players in a section about companies paying tax? It may seem obvious, but the gambling companies won’t want to incur all the costs themselves and as such they will build them into the odds.

Within the UK there are two main pieces of legislation which protects players and the gambling companies.

(2) ensuring that gambling is conducted in a fair and open way, and

(3) protecting children and other vulnerable persons from being harmed or exploited by gambling.

This Act was introduced to make the legal framework of the Gambling Act 2005 more robust. It focuses on the remote online casinos and covers two specific areas;

Gambling Regulations in the UK

As the online gambling industry grew within the UK, there was a need to ensure that the companies conducted themselves legally and fairly. As such the UK Gambling Commission (UKGC) was introduced on the 01st September 2007. They not only regulated the companies, but they also introduced licences which could be removed if there were any breaches of the Gambling Act. If the licence is removed, then that casino or betting site can no longer provide a service to any UK players.

Online gambling sites have seen significant changes to the laws since the inception of the UKGC. This includes promotional imagery now having to provide basic information on any terms and conditions, the banning of credit cards as a valid banking method for online gambling, the introduction of thorough identity checks called ‘Know Your Customer’ and ‘Source of Wealth’, plus the removal of demo options for unregistered players of the site.

All these changes have been introduced to protect vulnerable players such as those who are underage or with a gambling addiction. Also, to reduce the impact of criminal activity within the online gambling industry, so that players can feel safe when they bet.

Summary of Gambling Winnings Tax in the UK Explained

The crux of this article is that if you’re a player in the UK, then you don’t have to pay tax on any of your gambling winnings. This is great for those of us who not only enjoying playing the games but are lucky enough to walk away with something.

The online gambling market today is so heavily regulated that you can feel safe as you bet. Just make sure the site you are playing on is licenced by the UK Gambling Commission, which you can do by entering their name into their licensee register.

We have plenty of other articles which can help you enjoy your time online, including How To Open a New Online Casino Account UK, Which Casino Bonus is Best for you, Highest RTP slots and Withdrawing Credit on an Online Casino.